Why Do Cats Chase Lasers?

Our dog bandana collection offers an expansive selection of designs and fabrics for every occasion! Great for a photo shoot, event, party, holiday, or everyday use. Dogs are known as man’s best friend so it’s only fitting that your best friend gets a gift of wearing the best dog bandana on the market. Accept Small Order. Contact us for the latest quotation and we will reply to your email within 24 hours.

The Allure of the Laser

Lasers are inherently stimulating to cats because of what they represent: fast-moving prey. Just because your cat doesn’t have to work hard for its food (unless you count all the effort it takes to meow all morning until you fill up its bowl), doesn’t mean that it’s not hardwired for the job.

As the dot of a laser darts around the room, your cat interprets it as a small animal trying to run and hide. As such, certain inherent feline behaviors come out, notably the innate desire to hunt, pounce, and kill the prey in question. The fact that it’s merely a projection doesn’t matter very much because your cat is operating on auto-pilot, not on intellect.

There’s another factor at play here too when your cat chases a laser, and that’s the fact that it simply looks appealing. To understand why it helps to have a base understanding of how your cats’ eyes operate and how they differ from human eyes.

The retina is one of the main structures of the eye. It is composed of two key types of cells: rods and cones. Rods deal with low light vision and detecting movement, while cones help the eye see color. Human eyes have more cones than rods, which means we see the world with a lot of vibrancy. Cats, on the other hand, have more rods than cones, making them experts at picking up even the slightest of movements.

What does this have to do with lasers? It means that they’re pretty hard to ignore. The moment you turn a laser point on your cat is going to pick it up in its peripheral vision, and if it hasn’t quite figured out yet that it can’t actually eat that red dot (or if it knows it can’t but doesn’t care) then that’s all it will take to start its predatory cycle. 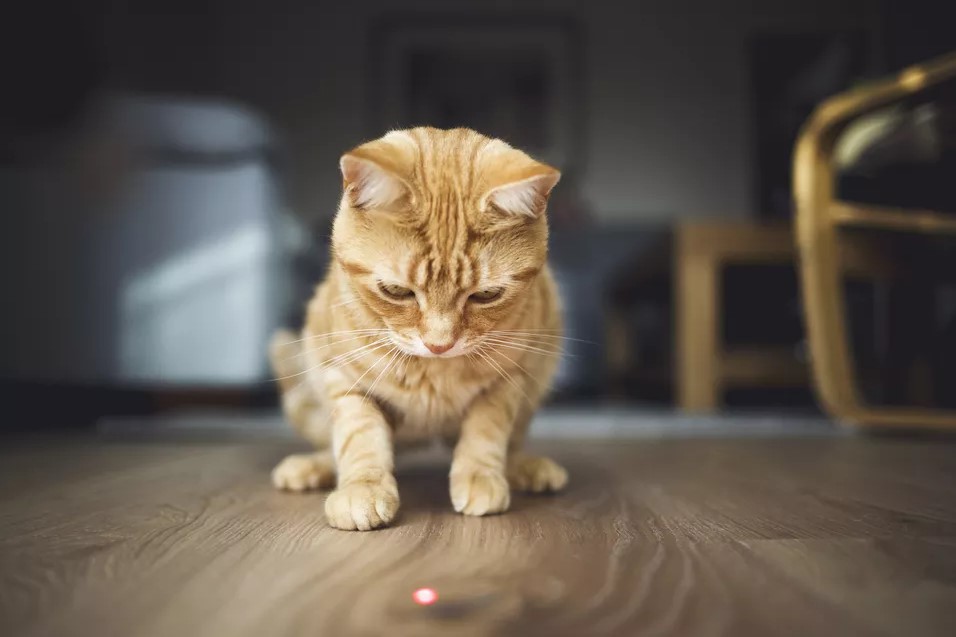 The Debate Over Cats and Lasers

It might be surprising to hear that there’s some controversy over whether it’s a good idea to tempt your cat with lasers, but the cat-laser debate is one that has been going on for some time.

The main problem noted by cat enthusiasts who are anti-laser is that having your cat chase a laser is a form of teasing. Remember, your cat is stalking and pouncing on that red dot because its brain is telling it to catch the food and kill it. The cat’s not doing it distinctly as a form of play, even if it’s having fun.

The laser is an unattainable target, and no matter how great your cat’s hunting skills are it’s never going to get to eat it and it’s never going to finish out its predatory cycle. Many cats figure out the ruse and stop interacting with the laser. Others find it immensely frustrating and may start behaving badly as a result. Frustrated cats act out in less than ideal ways, such as by becoming destructive or aggressive. If you notice a connection between playing with your cat and a laser and bad behavior, it’s probably time to put the pointer away for good.

To help make laser pointers more of a game and less of a tease, give your cat a treat or a physical toy right when you’re finished playing. That way it’ll get the satisfaction of a “kill,” even if it’s not of the laser itself.

Provided that your cat seems to actually enjoy chasing a laser and isn’t just caught in an endless loop of hunt-pounce-disappointment, there’s probably nothing to be worried about. Chasing a laser is a fantastic way for your cat to get some physical and mental exercise, and also lets it tap into its kitty instincts for a bit—something that indoor cats don’t get to do quite as often as they might like to.

Of course, you should still make sure to follow proper safety tips to avoid harming your cat during play. Here are two big ones to note.

Don’t shine the light directly in your cat’s eyes. Even toy lasers emit an incredibly bright light, so you mustn’t shine it directly at your cat (or yourself!). If you do, you could cause vision problems and/or eye injuries.

Provide your cat with plenty of other toys. If the laser is your cat’s only outlet for play, it’s more likely that frustration will start to build up. Make sure that it has access to a lot of other objects for hunting and playing with, including catnip toys and wands.